After Romulus, the founding father of Rome, there were a series of Kings until the time of the republic. These men are part flesh and blood and part myth; having lived too long ago for there to be enough evidence for their existence and the achievements attributed to them. The bulk of what we know of them comes from Livy, brilliant historian, 59BC-17AD. (Image above : Romulus’ Victory over Acron. Jean-Auguste-Dominique Ingres 1812. (Wiki Commons).

Six further Kings after Romulus, being considered the 1st, have been identified forming a line of succession that takes Rome from Romulus in 753 until 510BC when the last King was deposed. They were elected, not born into their posts, with a couple having claimed divine right to rule.

Numa Pompilius institutes the cult of the Vestals by Cavalier d’Arpino (1636-1640) CE in the Hall of the Horatii and Curiatti (Mary Harrsch, https://www.flickr.com/photos/mharrsch/6792499370)

2.Numa Pompilius: A man from the Sabine tribe in central Italy, he is remembered for the instigation of Rome’s religious and political institutions including the Vestals.

His relationship with the nymph Egeria for her counsel is immortalised in frescos and paintings. When you head for the Appian way for an outing and pass the Porta Capena you are passing the spring formed from Egeria’s tears due to the grief of Numa’s death in 673BC.

3. Tullus Hostilius: Tullus led wars against the Sabines and  Alba Longa where both the previous King and Romulus hailed from. He is remembered for his warring nature and for not respecting the necessary rituals and calendarised events of the day. It was thought that he had brought upon himself and the Roman people pestilence and showers of stones. He was finally entirely reduced to ashes after his home was struck by lightning in 642BC for so enraging Jupiter. The Curia Hostilia was built during this reign.

Lo Scheggia, Reduction of Alba Longa by Tullus Hostilius, Circa_1430.

Doors of the Curia Hostilia and where they were located in the forum.

4. Ancus Marcius: Following this epic disastrous finale to the previous King, the first job for Ancus was to publicly display the religious ceremony calendar and observe it strictly.

Ancus was another King that got caught up in warring and subduing the neighboring folk extending Romes territory. Now Rome extended north, south and out to the sea where he established Ostia.

My own image of Ostia Antica.

5. Tarquinius Priscus (Tarquin the Elder): An Etruscan with a Greek father, Tarquinius also took to warring with the locals. (Funny how many of these Kings were not born in Rome or their parents weren’t and they knew what it was to not be Roman yet seemed to happily go about the business of attacking other non-Romans). His lasting legacy was to build the Circus Maximus and the great sewer the Cloaca Maxima.

Two images of the mouth of the Cloaca from across the Tiber, “Rome, ancient and modern, and its environs” Author: DONOVAN, Jeremiah – D.D., 1842 and Lalupa 2005, both Wiki Commons.    …Could this be the same spot?

Tarquinius was murdered by the sons of Ancus Marcius, King 4.

6. Servius Tullius: The son of a slave of Tarquinius, the previous King. He was seen with a ring of fire above his head while sleeping as a child and so divinely appointed. There was some war particularly with the Etruscans, however, he is mainly famous for his reforms of the political system and creation of the Roman census.

The Servian reforms extended voting rights and outlined class obligations to the military and for financial purposes. He is named for the construction of the Servian walls although the dating doesn’t stack up, Servius reigning in the mid 500BCs, wall built 300BCs.

A preserved section of Servian Wall next to Termini. Wiki.

He was assassinated by his daughter and her lover, the son of Tarquinius, (King 5) on the Vicus Sceleratus (the evil street), now rumored to be located where the Borgia stairs lead to Piazza di San Pietro in Vincoli.

My own pictures of San Pietro in Vincoli.

7. Tarquinius Superbus (Tarquin the Proud): The murderer of Servius took the throne. He was to be the final King and was viewed by the people as a tyrant.

He refused to bury his predecessor and had many members of the senate put to death. He exploited the people having them continuously laboring on building projects including the Temple of Jupiter on Capitoline Hill.

Temple of Jupitor from History of Rome and of the Roman people from its origin to the invasion of the barbarians : 1890.

He used devious tricks and tactics in war in order to keep the coffers full. The final event was a story where his son raped a good and proper woman who suicided in despair of the despicable act. Tarquinius was overthrown and sent into exile. 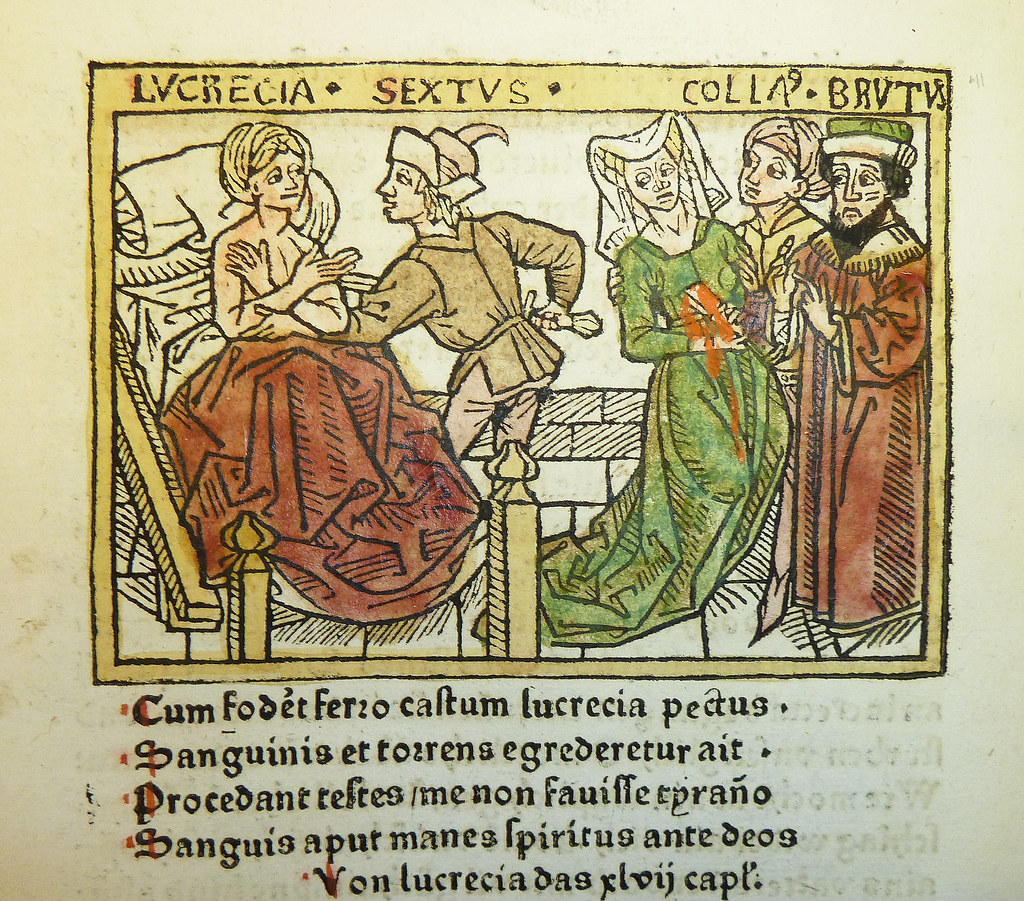 Woodcut illustration of the rape of Lucretia by Sextus Tarquinius and her subsequent suicide before her husband Lucius Tarquinius Collatinus and Lucius Junius Brutus. Zainer, Johannes, ‡d d. possibly 1541.

The monarchy was abolished around 510BC and thereafter the term King was viewed in a poor light in Rome.